The highest value is close to 1 million yen annually、In the first auction, which was held in Sapporo Central Wholesale Market in speaking of brand fruit of Yubari "Yubari King" ★ 5 May of 23 days、2014The highest value is an amazing second ball 2.5 million yen of the year! ! Along with 2008 now in the past the maximum amount(*&#8217;ω&#8217;*)Co., was dropped auction is of the same Sapporo in 2008 the company Ibi。Namekawa KamaIchiro president in the wake of the "Melon、That's right was talking and if Moraere interested "in Hokkaido Bussan。 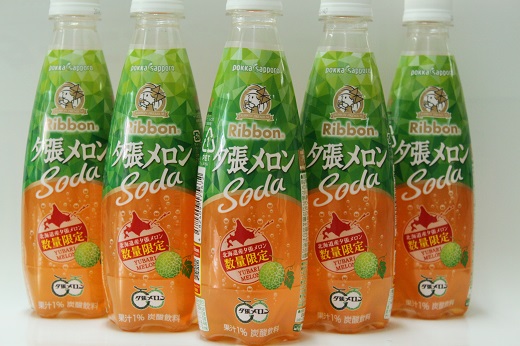 ポッカサッポロフード＆ビバレッジ(株)Also this year from、Yubari King fruit juice "Ribbon Yubari melon soda (410ml：140Yen) "is released nationwide from June 23! Ribbon is caught vertical of rich aroma can enjoy carbonated drinks containing fruit juices of Yubari King taste precisely because the taste-making in cooperation with Yubari agricultural cooperatives, which celebrated its 100 anniversary this year(*&#8217;▽&#8217;)2009 released in Hokkaido limited、2012It has been released nationwide from the year。Package of ribbon-chan is also very cute! Although ♪ Yubari melon soda seems to be able to buy, such as in the supermarkets and the Internet、Since the limited quantity, limited time as soon as possible ★